Very rare first edition of this Catholic satire on the French Enlightenment, particularly targeting Voltaire but finding Rousseau more agreeable. Although conservative in its religious stance, the work is broadly anti-establishment and proposes the dissolution of the monarchy in favor of a utopian republic "based on the cornerstones of liberty, equality, justice, and probity". As well as contributing the 'editor's preface', the English Catholic priest John Turberville Needham (1713-81) composed the second part - with a divisional title-page. Fluent in French and serving as Director of the Brussels Literary Society, Needham's correspondence with Voltaire had already been published in 1769.

The rest of the text is attributed to Colmont, and its attacks on the French government brought him under scrutiny by the authorities. Threatened with imprisonment in the Bastille, Colmont fled to Scotland for a year. Needham's contribution probably attracted less criticism, and was the last of his ripostes in a long-running feud with Voltaire (cf. Roe, "Voltaire Versus Needham: Atheism, Materialism, and the Generation of Life").

[In response to Voltaire's multiple barbed attacks on Needham], "Needham made one other attempt to strike back at Voltaire when in 1770 he published anonymously an Extrait d'un discours prononcé a Pekin […]. Sent by Needham to Bonnet in 1770 (letter 43), Needham's Extrait was published in Les Vrais Quakers, an anonymous work of which Needham was the editor [...] The Extrait was purportedly the prize-winning discourse delivered before the 'Hio' or 'Salle d'Assemblée des Lettres' of Peking and was intended to be a comparative eulogy of the most famous poet and the greatest orator of the previous century. Thinly disguised as Tévilaor and Suasoure, Voltaire and Rousseau are subjected to a critical and candid scrutiny, in which the vain poet, filled with scorn and envy, does not fare well against the virtuous orator-philosopher, who is too sensitive to the injustices of the world to be anything but a misanthrope [etc. etc.] ... Needham was quite proud of his portraits of Voltaire and Rousseau. When announcing the Extrait to Bonnet in 1770, he described it, without revealing his identity as the author, as a piece 'qui part d'une main de maitre' [while] Bonnet said that the Extrait was weakly written in rather poor English-style French and was quite unoriginal in content…" (Mazzolini & Roe, Science against the Unbelievers: the Correspondence of Bonnet and Needham, 1760-1780, pp. 91-92).

Front joint rather chipped but holding perfectly; otherwise an excellent copy, clean and fresh. With a handful of manuscript corrections throughout the text (some corresponding to later errata).

The work is rare: worldwide, OCLC shows only the BnF, Geneva, Berlin, the NYPL, and the KB in The Hague. A second edition appeared in 1771; and it appears that a handful of copies with title-pages dated 1770 also contain an index and a list of errata, evidently never bound into the present copy's contemporary binding. The BL holds only the 1771 edition, but COPAC shows two UK copies, at the Society of Friends and Leeds. 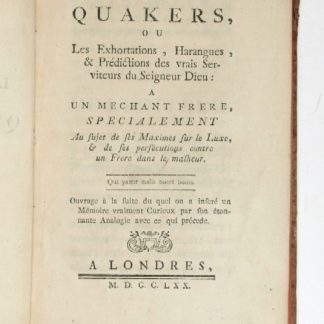