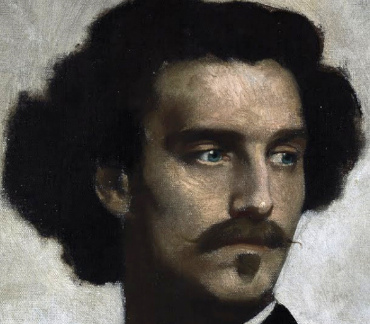 Feuerbach attended the Düsseldorf Academy, where he was taught by Johann Wilhelm Schirmer, Wilhelm von Schadow, and Carl Sohn. At Antwerp he studied under Gustav Wappers. In Paris he was a pupil of Thomas Couture and produced his first masterpiece "Hafiz at the Fountain" (1852). In Rom he met Anna Risi (known as "Nanna"), who sat as his model for the next years. She was succeeded as his principal model by Lucia Brunacci, an innkeeper's wife who posed for his pictures of Medea. In 1873 Feuerbach moved to Vienna, having been appointed professor of history painting at the Academy. His major works include "The Battle of the Amazons" and "Orpheus and Eurydice".