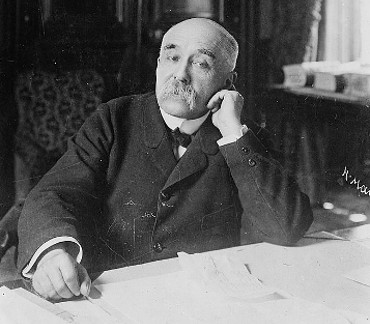 Georges Clemenceau was a French statesman who led the nation in the First World War. A leader of the Radical Party, he played a central role in politics during the Third Republic. Clemenceau served as the Prime Minister of France from 1906 to 1909, and again from 1917 to 1920. In favour of a total victory over the German Empire, he militated for the restitution of Alsace-Lorraine to France. He was one of the principal architects of the Treaty of Versailles at the France Peace Conference of 1919, and took a harsh position against defeated Germany, though not quite as much as President Poincaré, and won agreement on Germany’s payment of large sums for reparations.