First and only Italian edition of George Cheyne's final work (1742), translated by a Florentine physician who attests to Cheyne's enormous popularity in England and addends a brief life of the celebrated doctor to the work. At the same time as Newton's geophysical ideas were being introduced into Italy (against some opposition!), the present work would indicate that Newtonian medicine (of the Edinburgh school) was also in circulation.

The present translation is dedicated to the Venetian Ambassador in London, Lorenzo Morosini, who during his residence "has had leisure to observe the great strides in Medical Science in that country". Most striking are Mei's repeated references to Cheyne as "one of the greatest modern luminaries of the Medical Arts, standing alongside Hippocrates amongst the ancients and the great Sydenham amongst the moderns".

George Cheyne (1671/2-1743) became one of the most prominent defenders of the Newtonian system of medicine in Edinburgh before moving to London in 1701. He was decidedly unsuccessful as a physician in his earlier years, and retreated to Aberdeen in 1705. "Little is known about the period between 1705, when Cheyne suffered his collapse, and 1715, when he re-emerged to the public…" (DNB). However, several of his later works proved immensely popular, among these the present one; according to the DNB the Natural Method "gives the fullest exposition of his mature thought… It both summarized his earlier ideas and added new material. In a section addressed specifically to women, he detailed his preformationist views on generation…". After an inauspicious start, Cheyne appears to have developed his career considerably; Gilbert Burnet and Hans Sloane are said to have referred their patients to him, and his Essay of Health and Long Life (1724) "made him one of the best-known physicians in Britain" (DNB).

Like Sydenham, Cheyne's works managed to reach foreign audiences; a French translation of the Natural Method appeared in 1749, while Cheyne's other works also enjoyed translations into Latin and Dutch. Cosimo Mei's introduction of the English physician to the Italian public is accompanied by a woodcut vignette and a quotation from Virgil, a life of Cheyne, and two prefatory notes to the reader explaining the circumstances of its publication. 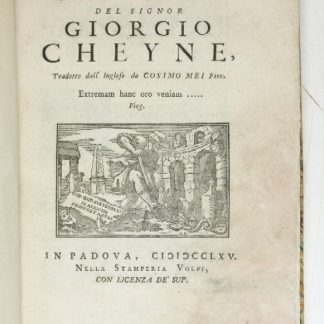