First and only edition of Hulsbusch's collection of ribald tales. Contains, among other anecdotes, ten stories from Martinus Montanus's "Wegkürzer" and 43 items from Jakob Frey's "Gartengesellschaft", translated into Latin. Among those written by himself is the story of a girl who showed herself naked at her window during a pageant in Augsburg.

The present copy is that of the Méon library described by Brunet: it was auctioned in 1803 at the Meón sale (no. 2446) and was regarded as rare even then. The front flyleaf bears Méon's purchasing memo: he had bought the book for 37 francs at the sale of the library of the great German scientist Johann Heinrich Lambert in 1780. At the Méon sale, it was knocked down to the French veterinarian Jean Baptiste Huzard (1755-1838), whose library stamp is on the reverse of the title page. In the 20th century, the book belonged to the French writer and collector of erotic literature Pierre Lous, whose pencil note is on the front flyleaf. Cf. Brunet III, 1639 (Méon cat.) and auctions catalog of the collection of Pierre Louys, vol. III, 1927, no. 3003.

Title page remargined (no loss to text); somewhat browned throughout.

Very rare; no copy at German auctions since 1950; only 3 copies established in USA via OCLC (Stanford; Univ. of Illinois; Univ. of Maryland). 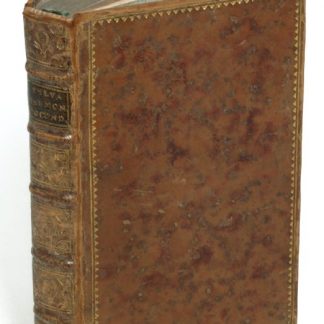