Salviati's great Counter-Reformation redaction of Boccaccio's Decameron, with the first illustrations made for his text

4to. (20), "400" (= 488) pp. With Vecchi's flower device in a strapwork cartouche on the title-page, a woodcut oval portrait of Boccaccio and 110 woodcut illustrations (mostly about 6.5 x 10 cm), 1 introducing the frame story on day 1, 9 larger ones (5 plus 4 repeats, 5 with a decorated 3-part woodcut frame and 2 in a frame built up from arabesque typographic ornaments) introducing days 2-10, and 1 for each of the 100 tales (including an occasional repeat). Further with woodcut tailpieces, more than 100 decorated woodcut initials (6 series?) including some repeats, factotums built up from acorns and further decorations built up from typographic ornaments. Set in italic types with headings and other incidental texts in roman. Contemporary limp sheepskin parchment, sewn on 3 cords, with a hollow back, headbands in red and yellow.

One of the most important and influential redactions of Giovanni Boccaccio's Decameron, the greatest and most popular work of Italian literature, here in the original Italian and with a portrait of the author, an illustration introducing each of the ten days of the frame story and one for each of the 100 tales, most of the woodblocks newly cut for the same publisher's 1597 edition, which was the first to illustrate Salviati's 1582 text. The publisher added the portrait and the five larger illustrations introducing days 2 to 10 for the present edition. Boccaccio (1313-75) began writing the Decameron soon after the plague that decimated Florence in 1348 and finished it in 1353. It was immediately recognized as a great work, and has remained a classic ever since. Two of its stories were published already by Peter Schoeffer (who had been Gutenberg's assistant) at Mainz in 1470, and Cardinal Pietro Bembo canonized the text by recommending it as the best model for literary vernacular Italian prose. That added to its already successful reception, with a new edition appearing almost every year. It is a classic example of stories within a frame story, the frame story revolving around the plague in Florence. Ten young noble Florentines (seven women and three men) decide to leave the city to avoid the plague, settling in a villa in the countryside nearby. They entertain each other for ten days by each telling a story each day, making a hundred stories in all.

Boccaccio himself recognized the controversial nature of some of the stories and took pains to defend them, noting that the stories could be "twisted and distorted" for wicked ends but are not in themselves wicked, and having the character Dioneo, the young man who tells or instigates most of the naughtiest stories, declare that there is no harm in telling naughty stories as long as one behaves honourably in real life. Boccaccio also noted that any reader who wishes may skip the stories that "bite". Although Boccaccio has the young man Dioneo tell more naughty stories than the other characters, he also has the women tell some, especially on day seven, when Dioneo sets the theme as stories of women playing tricks on their husbands. In fact Boccaccio wrote that his book was intended especially, though not exclusively, for lovelorn young ladies.

Modern scholars often accuse Salviati of butchering Boccaccio's text but in fact he showed the greatest respect for it. He acknowledged the 1573 redaction, produced by a committee that had consulted manuscripts from soon after Boccaccio's death, but also consulted early manuscripts himself. Both redactions showed fidelity to Boccaccio's 14th-century Tuscan dialect, and Salviati even retained spelling inconsistencies that he judged to be original: an attempt to reconstruct Boccaccio's text as closely as possible in the humanist tradition.

But Salvati had been charged with producing a text that would satisfy the demands of the papal injunction, and he did so using several clever techniques. As we have noted, the Church was more concerned with its own reputation than with eroticism per se, so in many cases Salviati could preserve the erotic escapades of priests, nuns, etc., by simply turning them into teachers, housewives or other people not seen as representatives of the Catholic Church. Sometimes he went even further and allowed the reader to enjoy Boccaccio's bawdy tales while actively introducing elements to help promote the Church, rather than simply omitting references to it. So when a young man pretends to be a deaf mute in need of work in order to gain admittance to a Tuscan convent where he provides sexual satisfaction to the nuns and mother superior, Salviati turns him into a wandering Arab who gains admission to the harem in the same manner: the Church had no trouble with stories that tainted the morality of Islamic peoples. In one of the most infamous tales, where a devout, naïve and attractive young woman seeks religious training from a hermit monk who teaches her the holy rite of "putting the devil in hell", Salviati turns him into a defrocked monk impersonating a real monk, and when he is discovered, the bishop has him executed. So Salviati could retain the erotic story by turning it into a moral lesson. In other stories he takes an idea from Boccaccio himself, simply presenting a naughty story, but adding a note that it is only a story rather than a real event, so also not immoral.

Inevitably, however, Salviati had to delete some passages, but here too he thought up a clever ruse. He declared that the most authentic manuscripts lacked pages or parts of pages, and that later editors had simply invented stories to fill the gaps. In the interests of purported scholarly accuracy, he therefore omits these passages and inserts an asterisk (*) to indicate that there is a "gap" in the authentic source. Many tales have no asterisks, but the story noted above about "putting the devil in hell" has more than a hundred. Perhaps readers thought the most erotic stories were the most frequently read and therefore sustained more damage, or that readers tore parts out to read in private. In any case Salviati actually brings attention to these gaps rather than trying to conceal them, though he conceals the fact that he created the gaps himself.

Salviati's redaction was a great success when it appeared in 1582, satisfying the Church and clearly also finding eager readers. The Giunti in Florence, who published the first edition in 1582, published a second later that year and many more followed. The present edition seems to be the seventh or eighth in the original Italian and the second by the present publisher, whose 1597 edition first illustrated Salviati's text. The present edition uses the woodblocks of the 1597 edition, but adds the portrait of Boccaccio and the five larger illustrations. The 1597 edition appears to have influenced many later ones, with several editions in French translation appearing in that year. The present edition has numerous errors in the running heads (indicating the day and the number of the story within that day) and pagination. Salviati's redaction remained the standard text into the 18th-century and was revived in the 19th. - With an early owner's monogram before the imprint. The title-page is worn and shows a faint water stain, one or two of the printed shoulder notes are very slightly shaved, and one or two leaves show a tiny marginal worm trail, but the book is generally in good condition. The binding is slightly rubbed, with some worm holes in the spine. A remarkable illustrated edition of Boccaccio's Decameron, showing a how a scholarly 16th-century editor cleverly navigated the troubled waters of Counter-Reformation censorship. 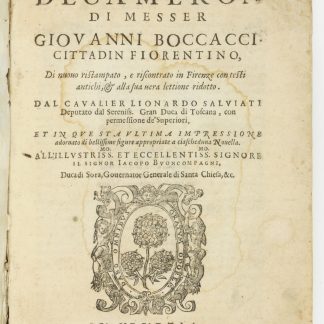