Austrian watercolours. Album with 51 topographical watercolours, depicting views from the Mühl dictrict in Upper Austria, from Styria and Lower Austria.

Charming Biedermeier watercolor album. Apart from the numerous castles and ruins, the album also contains views of several mills, churches and landscapes in Upper and Lower Austria as well as Styria. The watercolors on bluish, yellowish and white drawing paper are tipped in within grey ink frames; two are signed with the name "Constantine". Below the frame, the watercolors have been captioned by the painter (some in French); the plates have been numbered in the top right corner by a different hand (1-53; numbers 23 and 24, which did not contain views but depicted the artist's private quarters, have been removed). 4-line calligraphic French motto on front endpaper; folded manuscript double leaf on front pastedown, containing a table of contents (by the same hand as the numbering). The series' focus is on the Mühl district in Upper Austria (37 watercolors), of which 17 show Schwertberg castle and environs, the nearby ruin of Windegg castle, and the neighboring mills. Further views show Klamm, Weinberg, Brandegg, and Ruttenstein castle. The principal Styrian views include Münichshofen castle near Weiz, the ruin of Sturmberg castle, and Herberstein. Among the seven plates from Lower Austria, those of Klamm near Schottwien, Pitten, Gutenstein, Merkenstein, and Brühl deserve special mention.

The delicate watercolors, almost all enlivened by figures an animals, and apparently executed by a talented amateur, captivate the viewer through their atmosphere: frequent sunsets alternate with scenes drenched in the warm light of the late afternoon; in other views, the almost unmodified bluish grey color of the drawing paper seems to hint at an approaching storm. 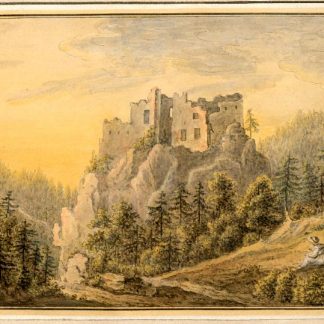