Klimt and Schiele, as seen by a fellow artist

[Klimt, Gustav] - Geyling, Remigius, painter and stage designer (1878-1974). Collection of 23 portrait drawings and caricatures, all drawn "from life" and signed, dated, and titled by Geyling (often citing the place of the sitting). Includes two T.L.S. by Arthur Schnitzler.

Royal folio. In later years mounted onto uniform backing boards by Geyling himself and laid into two simple portfolios, both of which contain his autogr. table of portraits. All leaves numbered throughout by the artist (1-24; Schnitzler's letters on their own backing are no. 23) and captioned with the name and dates of the person portrayed.

The earliest portrait dates from 1897, the year in which the Vienna Secession and the artistic periodical "Ver Sacrum" were founded. According to his inscription, it was for the latter that Geyling drew the present portrait of the Secessionist sculptor Rudolf Bacher. Many of the pictures collected in these two portfolios were created several years later, in 1905, during the heyday of the Wiener Werkstätte (for which Geyling designed postcards) and a year after Geyling and his partner Otto Prutscher closed their joint studio for furnishings and décor. "Although a member of the conservative 'Künstlerhaus', Geyling always was close to the Vienna Secession" (cf. AKL LII, 462). For Geyling, "Klimt, Hoffmann, Roller, Olbrich were not only my colleagues, but also my friends, and many a night did we debate about the 'new and pure art'" (cf. Remigius Geyling erzählt, aufgezeichnet von Gerald Szyszkowitz. In: Nebehay/Krug, pp. 5-8, here: p. 7). These nights apparently offered numerous opportunities for Geyling's portrait studies: apart from the portraits of the aforesaid, the present collection contains a picture of the frequent Tivoli patron Egon Schiele (from the year of his death) as well as a portrait of Adolf Loos, drawn in the famous Café Museum. It was probably here where also Karl Kraus (entitled "Fackl-Kraus" by the artist) sat for Geyling. The great painter enjoyed an especially close relationship to Gustav Klimt: for many years he belonged to the circle of those who shared breakfast with Klimt at the Tivoli (cf. Nebehay/Krug, p. 3). In that legendary restaurant at the Green Hill in Vienna's Meidling district, he drew the two portraits of Klimt in May 1905. Together with Peter Altenberg and Otto Wagner, Klimt is one of the few persons whom Geyling sketched in more than one portrait only (all on a single page). It was upon Klimt's recommendation that Geyling was hired as head of decorations at the "Neue Wiener Bühnen" in 1910; his first production was the premiere of Schnitzler's "Undiscovered Country". It was during the rehearsals for this production, on 14 October 1911, that Geyling produced the present portrait of Schnitzler. Schnitzler's two letters to Geyling concern their joint project of a "Medardus movie". Geyling had worked as decorator for the most important Austrian film productions. So successfully had he transferred the stylistic devices of the Wiener Werkstätte into historical tragedy that in 1924 Fritz Lang used Geyling's designs for his great silent "Nibelungen" series (cf. AKL LII, 462).

Provenance: From a Viennese private collection, to which the artist himself sold both portfolios.

Nos. 6-8 and 18, 21 and 22 are each illustrated in full-page size in: Ch. M. Nebehay & H. Krug (eds.). Remigius Geyling. Künstler und Literaten. Gezeichnet in Wien um 1900. Wien 1974. (= Jahresgabe der Wiener Bibliophilengesellschaft). This work does not describe the present collection; all other drawings are unpublished. 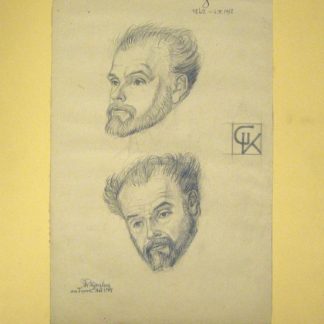