Ferenc Nadasdy's last will and portrait, from the Sermage family archives

Nádasdy, Ferenc III Graf Fogáras, Hungarian High Judge of the Crown Court, printer, historian, and conspirator (1625-1671). Collection of family documents from the archives of the Counts Sermage de Szomszedvár, descendants of the Hungarian conspirator Ferenc Nádasdy, including his last will and testament in a ms. copy with autogr. authentication by Empress Maria Theresia.

6 Imperial documents for members of the Nádasdy and Sermage families (issued by Franz Josef I, Franz I, Maria Theresia, Ferdinand I, and Ferdinand II), 4 portrait miniatures, several photographs and miniature coats-of-arms.

Ferenc Nádasdy, a descendant of King Edward I Plantagenet and grandson of Ferenc Nádasdy, the "Black Prince" (1555-1604), who had led many successful campaigns against the Turks but is mainly remembered as husband of the "Blood Countess" Elizabeth Báthory (cf. T. Thorne, Countess Dracula. London 1998), served as Hungarian High Judge of the Crown Court. He was beheaded in Vienna on 30 April 1671 as one of the four principal leaders of the so-called Wesselényi conspiracy. The conspirators had conducted secret talks with France and Turkey for support against Emperor Leopold I; the conflict escalated when they arrested the Hungarian governor Count Rüdiger von Starhemberg. It was Nádasdy's failed attempt to throw off Habsburg rule that brought about Austria's absolutist and repressive regime in Hungary (cf. Encyclopaedia Britannica, s. v. "Wesselény Conspiracy"). Nádasdy's fortune and property were seized by the Crown, but the Emperor is said to have returned most of it to several of his children. Similarly, the change of name originally demanded of the sons was not enacted, as they served in high positions of church and state under their true name (cf. Wurzbach XX, 16). A fine ivory miniature portrait of Ferenc Nádasdy that was passed on within the family until the 19th century bears witness to the uninterrupted veneration of the executed national hero. The portrait is accompanied by an explanatory document by Nádasdy's great-granddaughter to her son, the poet and statesman Karl Johann Peter Graf Sermage von Szomszedvár (1792-1851). The 19-page document in booklet form prepared for Joseph Graf Nádasdy contains the text of several last wills and entailments concerning the family and bears Mariua Theresia's autogr. authentication and seal; it is countersigned by Nikolaus Palffy. The miniature portraits of Nádasdy's descendants by some of the most highly regarded portrait painters of their times, such as Wenzel Schránil (1821-84) and Georg Koberwein (1820-76), bear witness to the eminent position that the family had regained by the 19th century. 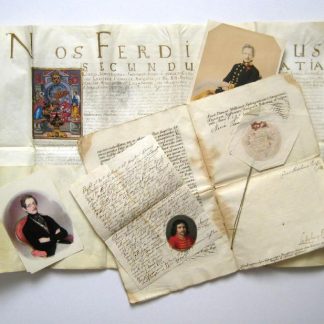