640:1114 mm. Engr. map with title and legend in cartouches, a compass rose, and a view of Lake Constance. Engraving composed of two plates, cut into eight segments, on black cloth and folded.

The best and most exact map of Vorarlberg of its time; the principal work of the farmer-cartographer Blasius Hueber (1735-1814), and much rarer than his other magnum opus, the "Atlas Tyrolensis" (in collaboration with Peter Anich). "One of the internationally most significant cartographic achievements of the late 18th century" (cf. Dörflinger). By order of Joseph II, Hueber spent the years between 1771 and 1774 mapping the territory; the fair drafting was finished in 1776. The engraving, however, was not to be completed until 1783. Matching the "Atlas Tyrolensis" in design and scale, the map showed Vorarlberg with all its counties (reaching beyond the present borders in the North and Northeast).

Backing cloth with slight traces of former mounting on reverse; the map itself is clean and in perfect condition. 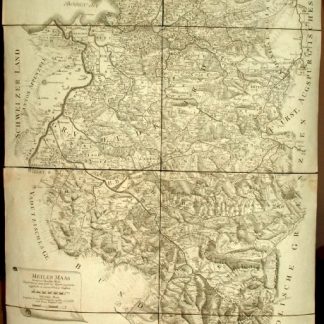