Second edition of this splendid instructional work (first published by Zerletti in 1775). Treats the entire field of singing technique, common musical ornaments and instrumental flourishes, and the rules of accompaniment and harmonization. In addition, Manfredini provides advice on how to interpret certain pieces (cf. MGG). V. Manfredini (1737-99) had been Kapellmeister of Empress Katharine II and teacher of her son Paul before retiring to Bologna in 1768, where he wrote his present chief theoretical work. His views on voice instruction drew severe criticism from Mancini. "The second edition (Venice, 1797) was much revised and enlarged with new sections on singing and counterpoint" (New Grove).

Bound with the undated "seconda edizione" of Asioli's principal instructional work, the "Principi elementari de musica" (first published in Milan in 1809). Asioli enjoyed a great teaching reputation; Mozart's son was among his students. Next to Simon Mayr, Asioli was regarded as one of the foremost masters in Italy. His writings on musical theory and methodology remained influential throughout most of the 19th century (cf. MGG I, 753f.). Rare in all editions; no copy at auctions since 1950. 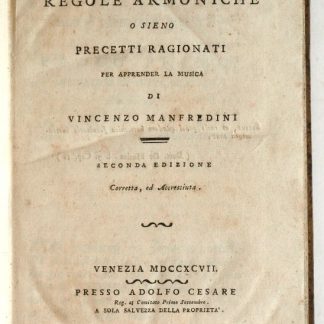