(16), 144, (4) pp. With woodcut printer's device on title-page, 3 full-page engravings in the text (including specimens of Arabic) and numerous ornamental woodcut initials and vignettes.

I: Early scientific work of comparative linguistics, comparing Hebrew, Arabic, Aramaic, Ethiopian, Latin, Greek, French, etc. in great detail regarding grammar, lexicon, and phonetic inventory. Christoph Crinesius (1584-1629), an orientalist from Bohemia and "well versed in the Hebrew, Chaldaic, and Syrian languages" (cf. Jöcher), had studied and taught at Wittenberg before becoming a preacher in Gschwendt. After the Protestants' eviction from Austria he became professor of theology in Altdorf; the present work was first published in two parts in Wittenberg in 1610.

II: Collection of theological and philological disputations by Hackspan, who is considered "next to Salomon Glass the most important Hebraist of his age. He also studied the Rabbis closely and made use of the knowledge thus gained for theology. Furthermore, he was familiar with the Arabic and Syrian language" (cf. ADB X, 299). After delivering an excellent disputation, Hackspan was made professor of oriental languages at Altdorf although he held no degree. Numerous passages in Greek, Hebrew, Arabic, and Syrian type.

III: The first printed edition of the Sefer nizzachon, the major work of the great apologist and cabbalist Jom-Tov ben Salomo Lipmann of Mühlhausen (fl. after 1400). In this "Book of Victory", written before 1410, Lipmann attacks "central Christian teachings, especially Christian interpretations of individual Biblical passages [...] The work, which presupposes a thorough acquaintance with the New Testament, created a sensation among Christians and provoked the Brandenburg Bishop Stephan Bodecker to respond with a treatise of his own" (cf. Jüd. Lex. III, 1119). Edited by the distinguished orientalist Theodor Hackspan (1607-59), who had by a dramatic feat acquired the work theretofore existing only as a secret manuscript circulating among the Jewish community: "Hackspan visited with several students a Jew in Schnattach, with whom he had frequently spoken of the Nizzachon, but from whom he had never succeeded in obtaining it. During the visit he made the Jew so trustful that he showed him the Nizzachon, and while the students, as had been planned, ensnared the Jew in arguments and discourse, Hackspan seized his chance, got in a ready coach with the Nizzachon and left the Jew standing. As soon as he arrived at home with his booty he cut up the book, and Schnell, Blendinger, Frischmuth and other men well versed in the Rabbinic language had quickly to copy it so that one could return it to the Jew, who came for it the very next day. And through this fine deceit this evil book came into the Christians' hands and later into print" (cf. Will). The Hebrew text (constituting the major part of the work) was printed in Altdorf, the Latin text (likewise paginated from right to left) in Nuremberg. The appendix contains numerous passages in Arabic. 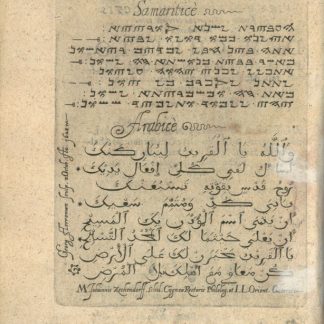