Fine copy of the authoritative second edition of Hottinger's chief work, expanded by several long sections in the original languages. "One of the most significant contributions to the history of Islam to have been published in the seventeenth century" and "a groundbreaking account of the history and basic tenets of Islam which relied almost entirely on authentic Islamic sources" (Loop). Principal work of the theologian Hottinger (1620-67), a founder of oriental linguistics. Includes extensive chapters on the Prophet's genealogy, the main doctrines and the religious context of Islam, as well as many lengthy quotations in Arabic. While preparing the "Historia Orientalis", Hottinger had to cope with several problems, the most important being the lack of Arabic printing types. In the first edition of 1651 he had solved this issue by transliterating the Arabic quotations into Hebrew and using Hebrew letters with 'niqquds' to cover the Arabic alphabet. In the 1650s, however, the Swiss printers Johann Jakob and Heinrich Bodmer had started the casting of Arabic, Syriac and Samaritan types in their own foundry, and the present second edition of the "Historia" could be printed with Arabic types. Hottinger presents the entire body of knowledge about Islamic history and religion available at the time. He revised the first edition, published in 1651, during his stay in Heidelberg in 1655, where he had been summoned by the Elector Palatine.

Some browning as common, but an outstanding copy, with the handwritten ownership of Elisabeth Malainda (gift, dated Höchstädt, 28 Dec. 1676) on the pastedown. 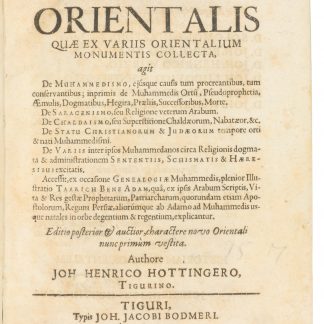