Attractive sammelband with rare pamphlets on the Thirty Years' War and the Turkish Siege of Vienna, a dissertation on military desertion, and a previously unknown encomium on a hero of the Turkish Wars, from the collection of the author of the latter publication, who was a member of the Pegnesian Order of Flowers, a Nuremberg literary society.

I: First German edition; continued by the editor until the year 1643. "The book's uncommon popularity was mainly due to Wassenberg's able and briskly narrated condensation of the War's events in a slender, readable quarto volume" (cf. ADB).

II: Rare pamplet, listed only in the BSB by VD 17: apparently the earlier of two variants, of which the other is not paginated and mentions the author in the slightly differently worded title: George Baron Kunitz, Imperial envoy to the Turkish court and present during the Siege, had left the manuscript behind during his flight. The catalogues of Austrian National Library and Vienna City Library list only this latter variant (also held at Admont, according to Kábdebo), while Sturminger also cites a copy of our present variant in the Austrian National Library. The engraving (mentioned only on the title page of the other variant) depicts the Battle of Vienna.

III: Remarkable Strasbourg legal dissertation about military desertion by J. A. Hammer from Regensburg (one of two variants with different dedications).

IV: Only known copy of this encomium of Elector Max Emanuel of Bavaria, who had fought in the 1683 Battle of Vienna and, together with the commanders of Lorraine and Waldeck, had achieved the victory of Esztergom and had recaptured Nové Zámky in 1685. The Regensburg jurist Sebastian Seelmann, a member of Harsdörffer's "Pegnesian Order of Flowers" since 1668 (under the name of "Silvius"), is mentioned on the title page as Secretary to the Elector. As evidenced by the characteristic hand-written spine title, this volume once formed part of Seelmann's own library, and it is likely that he assembled the volume personally in this order for binding. Front hinge reinforced with old paper; very well preserved. 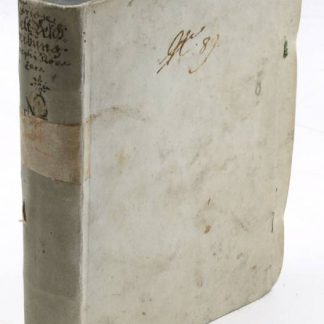