Partial estate of the Emperor's mistress

Collection of correspondence from the estate of Katharina Schratt, providing a panorama of the acquaintances and society of the actress who was introduced to the court as reader to Empress Elisabeth and later gained fame as Franz Josef's mistress and confidante. Although the entire material dates from the years when her relationship to the Emperor was popular knowledge, there are naturally no explicit references to this connection in any of the letters. Similarly, we can only speculate about the nature of Miss Schratt's gift to Johann Strauß: "To be thus honoured by your kindness is more than I have deserved. I beg to say my most heartfelt thanks. Please rest assured that this support which I have received from you will accompany me on all my paths and I will always honour it as a precious good [...]" (J. Strauß, ALS, 2 pp. Vienna, 25 Dec. 1894). The letter by Hans von Wilczek to the Emperor's mistress is of especial interest, as it contains indications of her close relationship to the great Austrian explorer: "[...] I stay away from Vienna as much as possible - but when I arrived at Herrengasse at 11 last night my doorman told me that you had called at half past 10. But I did not want to call back, it already being 11 - I beg forgiveness and - don't be angry with me! Is there anything I can do? [...]".

We also learn that the popular poet Adam Müller-Guttenbrunn had written a comedy just for her, "Die lächelnde Gräfin" ("The Smiling Countess"): [...] Naturally I would be prepared to fulfil any request regarding the title role. Also, the Countess's court need not be Vienna. That way we might even get it performed at the Burgtheater. Nobody has seen the play's ms., nobody knows it exists, it entered your hands quite virginal [...]" (2 June 1905).

Her colleague Helene Odilon, one of the greatest actresses of her age, who after suffering a stroke in 1903 was put under tutelage by her grasping relatives, writes a touching plea for help: "My desperation made me think of appealing to you, my dear lady, to help me achive my human rights. I beseech you to save me! Save me - I beseech you. My physical and mental sufferings have gone on for too long. As my physical condition improved, the emotional torture of tutelage grew and torments me and today is a spectre that haunts me like death [...]" (25 Dec. 1906, 6 pp.).

The collection is topped off by several ephemera from Schratt's possession, including invoices, invitations, and a bill of exchange for 170 florins, written by herself. Detailed catalogue of contents available on request. 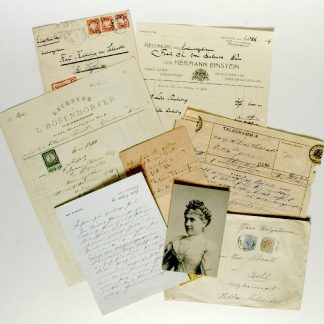