Album with entries by the foremost German and Austrian writers, musicians, and actors of their age

4to (196 x 244 mm). 40 ff. (some blank) containing ca. 90 entries by writers, musicians, and actors, as well as by family members, teachers, and classmates. Original navy leather with gilt cover borders. All edges gilt.

A fine document of a young autograph collector's passion for the world of the stage, and of the Viennese "World of Yesterday" described by Stefan Zweig, remarkable for its surprising number of eminent contributors.

Alice Wagner, born in Zadar, Croatia (then under Austrian rule) eight days before the assassination of Archduke Franz Ferdinand in Sarajevo, was the daughter of the mechanical engineer Rudolf Wagner and his wife Anna; she spent her childhood in Vienna's middle-class 9th district. The earliest contributors to her album - apparently a gift for her 11th birthday - are her teachers, school friends, and relatives, and after gathering a dozen of such entries between 1925 and 1929, her interest in her collection appears to have waned. Yet after a hiatus of a year, now aged nearly seventeen, Alice finds a new use for the navy-blue volume: clearly a devotee of the theatre and opera, she turns to pursuing the signatures of the great performers and writers of the stage. In 1931 she obtains the signatures of singers Käthe Dorsch and Hans-Heinz Bollmann, as well as of playwrights Anton Wildgans and of Christa Winsloe, who recommends to her young admirer the movie version of her play, "Mädchen in Uniform" (ignoring the age restriction passed on the then-notorious film).

In the year 1932 alone Alice gathers no fewer than 37 dated contributions, which include internationally prominent writers such as Thomas Mann, Ernst Toller, Erich Kästner, and Jakob Wassermann, but also Viennese celebrities such as Stefan Zweig, Felix Braun, Felix Salten, Richard Beer-Hofmann, Max Mell, Franz Theodor Csokor, Ernst Lothar, Franz Lehár, Robert Stolz, Hans Moser, Otto Tressler, and even the physician Julius Wagner-Jauregg. The most peculiar entry is that by the satirist Alexander Roda Roda, who - long a happily married man, first by common-law and then legally - signs himself as the 18-year-old Alice's "fiancé" on August 4th, at 7:27 p.m. precisely. Underneath this tongue-in-cheek inscription the cabaret artist Fritz Grünbaum adds his own name on 28 April 1933, whimsically appointing himself "best man"; and underneath his entry, the actor Paul Morgan adds his own name on 10 October 1933. Further contributors of the years 1933/34 include Max Brod, Arnold Zweig, Attila Hörbiger, Tilla Durieux, Oskar Maria Graf, and Paula Wessely; undated entries include Ernst Deutsch and Max Pallenberg, Bruno Walter, Karl Schönherr, and Ferdinand Bruckner.

Contributions dry up after 1934, possibly reflecting as much the now 21-year-old Alice's changing interests as the increasing political constraints on Viennese culture, first under Austro-fascism and then following the National Socialist "Anschluss". On 9 March 1939 the Wagners, who were Jewish, were evicted from their home in the well-to-do Ayrenhoffgasse and were forced to move into a "Jew house" in the third district, where Jewish tenants were concentrated before deportation. At their address at Untere Weißgerberstrasse 5, apartment 7, the Austrian Holocaust victims' database records six known victims aged between 7 and 71 years, all deported to Minsk in November 1941 and to Auschwitz in November 1942. Alice Wagner escaped the fate of her housemates (which was also that of several of the contributors to her album, such as her "best men" Fritz Grünbaum and Paul Morgan): in July 1941 she married a 40-year-old Romanian, left Vienna, and in March 1942 gave birth to a daughter. It is not known how the family survived the remaining war years, but they returned to Vienna in early 1947 and moved into a house in Berggasse, not far from Sigmund Freud's old office. Her parents, too, survived the Holocaust. Her album gives poignant evidence of the last flaring up of the old Viennese and German cultural scene before its collapse.

A detailed list of contributors is available upon request. 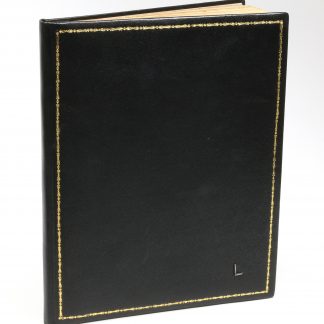