Probably the earliest authority for coffee-drinking in Europe

Lithgow, William. Nineteen Years Travels through the most Eminent Places in the Habitable World.

Somewhat later edition of this famous work that saw twelve editions by 1814, originally published under the title "The total discourse, of the rare adventures, and painefull peregrinations of long nineteene years travayles, from Scotland to the most famous kingdomes in Europe, Asia, and Affrica" in 1632; a first draft had appeared in 1614. No copy of this 1682 edition at auction in 35 years.

Lithgow, a Scot, travelled extensively throughout the Levant in three journeys between 1610 and 1622, visiting Greece, Constantinople and the Eastern Mediterranean from 1610-13; North Africa and Italy from 1614-19; and Spain from 1619-21. "He travelled mostly on foot and had a greater knowledge of the interior of the countries he visited than most travellers of this period. He provides interesting details of the society, men, and manners he observed" (Blackmer). Lithgow's work is "probably the earliest authority for coffee-drinking in Europe, Turkish baths, a pigeon post between Aleppo and Bagdad, the long Turkish tobacco-pipes, artificial incubation, and the importation (since about 1550) of currants from Zante to England" (DNB). 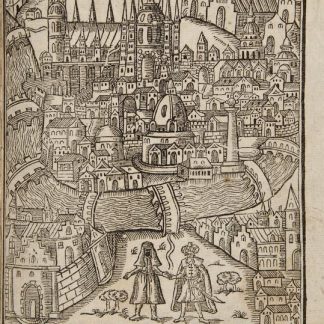 You're viewing: Lithgow, William. Nineteen Years Travels through the most Eminent Places in the Habitable …London, 1682. € 3,500.00
Add to cart