Naval patent for an American boat

Naval patent for an unidentified American boat, counter-signed by trade secretary Jean-Baptiste Henry Collin (1776-1837), state secretary Pierre Antoine Noël Bruno comte Daru (1767-1829), naval secretary Denis Decrès (1761-1820), and the director general of customs. Fine document from the age of the Napoleonic Wars, when the English army had occupied the Iberian Peninsula, fighting against Napoléon's troops, and field marshal Wellington was about to commence his final (and ultimately successful) attack. The present letter patent was issued by the French consul in Charlestown, New York, Boston or Baltimore and permitted American ships to move more or less freely toward France. The British warships were blocking the U.S. ports and obstructing American trade with France - one of the causes for the War of 1812, not resolved until December 1814. 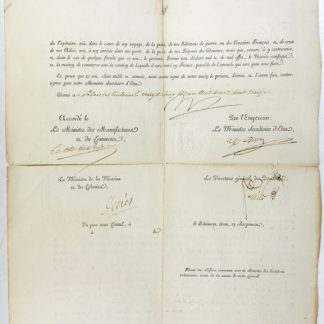