The ancient city of Fustat

First Arabic edition. Atlas of plates intended to accompany Aly Bahgat's 1928 Arabic translation of the original French edition of his "Fouilles dal Foustât" (Paris, 1921). The city of Fustat, the first capital of Egypt under Arab rule, reached its peak in the 12th century, with a population of approximately 200,000. It was the center of administrative power in Egypt until it was ordered burned in 1168 by its own vizier, Shawar, to keep its wealth out of the hands of the invading Crusaders. The remains of the city were eventually absorbed into nearby Cairo. Today, Fustat is part of Old Cairo, with few buildings remaining from its days as capital, though there have been many archaeological digs which have taken advantage of the wealth of buried material in the area. Many ancient items recovered from the site are on display in Cairo's Museum of Islamic Art.

Table of contents and captions in Arabic and French. At head of title: Dar al-Athar al-Islamiyah / Musée de l'Art Arabe. 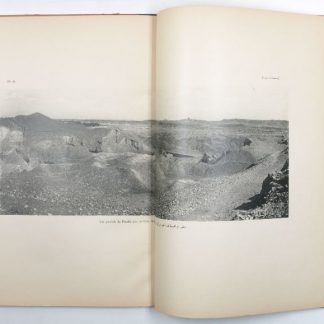