Interesting letter (in German) to an unidentified professor, accompanying the first edition of his work on Brazil. Very likely to his former academic teacher in Göttingen, Johann Friedrich Blumenbach (1752-1840), under whom the author had read natural history in 1811-12: "Dearest professor, please accept this small token of my deep gratitude and veneration, and exercise forbearance when looking upon this product borne forth not by a scholar, but by a mere dilettante of descriptive zoology [...] The printer has retained a large number of obvious errors which unfortunately were in the manuscript, by fault of the copyist [...]".

Following the example set by the Humboldts, the Rhenish Prince Max zu Wied made significant contributions to botany, zoology, and ethnology through two long and well-documented expeditions, lasting several years. He led an expedition to Brazil in 1815-17, studying flora, fauna, and the native population. The prince was awarded an honorary doctorate by the University of Jena in 1858.

Letter shows slight edge damage to centerfold (no loss to text); some browning and traces of original folds. Book variously browned due to paper; the beautiful binding is very well preserved. Without the separately published plate volume. 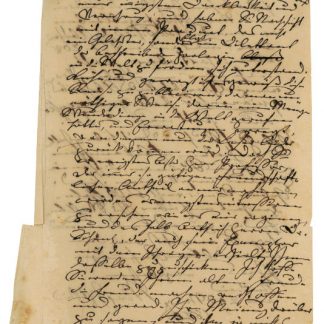