First German edition of this history of the Jesuit mission in Japan, first published in 1689. Accounts of the country, its inhabitants, and their customs. The plates show costumes, buildings and scenes of martyrdom. Although the book was widely translated, the Catholic church curiously took exception to it: "Crasset's history was scarcely original, for it was drawn in great part from the work which Father Solier had issued in 1627; he merely retouched the style and continued the narrative from 1624 to 1658. The objection is made that the work lacks precision, is heavy, and is crowded with details. The author attributed the origin of the persecution of 1597 to the imprudence of the friars in making their religious ceremonies too public" (Cath. Ency. IV, 468).

Binding well-preserved. Title page and gutter near end show insignificant worming (no loss to text); slight brownstaining. From the library of the Canons Regular in Polling, Upper Bavaria, secularized in 1803 (their engr. bookplate, dated 1744); later stamp of the Bad Tölz Franciscan monastery (closed in 2008) on title page. 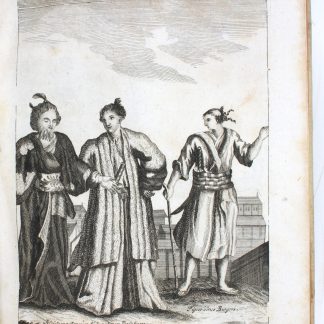