The letter is addressed to Peter Le Neve Foster, Secretary to the Society of Arts, with whom Livingstone corresponded a good deal during this period, asking him to supply samples which give an idea of the papers for the Indian civil service examinations: "[...] Neither of my boys are fit as yet for it but I would like to shew them what is expected one of them got prizes for Geography German French & Latin yesterday and seems likely to go on in these studies - Another got a prize for drawing - I wish to set them to aim high [...]".

Livingstone worries about the future of his surviving son, while preparing for his final departure for Africa that August. He had been invited to return to Africa by the Royal Geographic Society that January, in order finally to sort out the problem of the Nile. He wrote this letter when staying with his long ailing and bedridden mother. Soon afterwards, thinking that she was rallying, he dashed down to Oxford in order to deliver a lecture, where he received a telegram announcing her death on the eighteenth. He and his wife Mary, who had died in Africa in 1862, had three sons, Robert Moffat Livingstone (1846-64), Thomas Steele Livingstone (1849-76) and William Oswell Livingstone (1851-92). Robert, the eldest, had died of his wounds the previous December, while fighting on the Union side in the American Civil War under the name Rupert Vincent so as not to bring discredit to his father, who was wont to accuse him of trading off his name. In Tim Jeal's opinion, 'Robert's life is really the story of Livingstone's failure as a parent' (Livingstone, Pimlico edition, p. 281). Oswell, the youngest, fell out of favour when in 1872, as a member of the RGS relief expedition that had been upstaged by Stanley, he failed to join his father but instead recommended him to return home, causing his father to dub him 'as poor a specimen of a son as Africa ever produced'. Tom, the middle and eldest surviving son, stayed the course and was to act as his father's chief executor; although it was to be his sister Agnes, Livingstone's doted-upon daughter, who became chief guardian of his reputation.

An album with letters to Foster by Henry Cole and others is included in the lot. 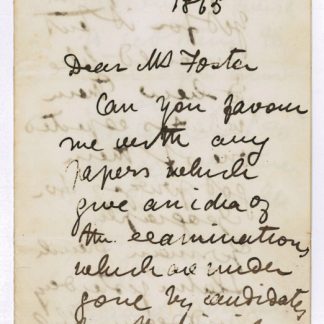