"This year the Arabs have had it all their own"

To the English diplomat and army officer Christopher Palmer Rigby, Consul of Zanzibar from 1858 to 1861, Kirk raises his doubts about Sultan Majid bin Said's desire to end the slave trade, whilst already foreseeing that his successor-to-be Burghash bin Said would be more open to this aim.

Kirk expresses his hopes that in Zanzibar there will "soon be a more rigorous policy for suppression of [the] slave trade", noting that "this year the Arabs have had it all their own", as Britain was engaged in the Abyssinian Wars, and that "my experience of the Arabs is [...] they are all liars, but Suliman bin Ali the real Sultan and only man to go to if you wish anything done is decidedly no exception", discussing the poor health of Majid, Sultan of Zanzibar, and a school of thought that his expected successor, Burghash bin Said ("a very intelligent Liberal man, outspoken and quick"), would be more friendly with the English, expanding on the rivalry between various local factions within Zanzibar.

John Kirk, chief assistant to David Livingstone during his celebrated expedition from 1858 to 1863, was appointed vice-consul of Zanzibar in 1866, and in 1873 "persuaded the sultan of Zanzibar to sign an anti-slavery treaty, closing the island's slave markets, and providing protection for all liberated slaves" (ODNB).

An incomplete transcription of this letter is reproduced in Russell, General Rigby, Zanzibar and the Slave Trade, 1935, pp. 301f. 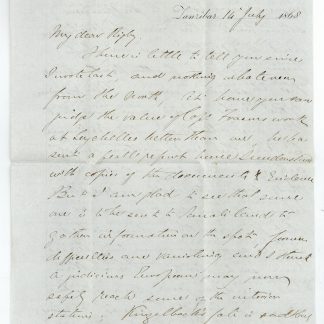