First edition of this fictitious homage to King Maximilian, offered by six cities of classical antiquity. Probably written in Pordenone, where Caviceo had lived for several years and was earned his doctor of laws in 1489 from the hands of Emperor Frederick III. The work begins with a reference to the eviction of the Hungarians from Austria: "The six cities are Babylon, Troy, Byzantion, Athens, Carthago, and Jerusalem. They all pay homage to Maximilian and bey for his protection [...] Interspersed with numerous references to contemporary events" (cf. Apponyi). The theologian J. Caviceus (1443-1511) studied at Bologna and entered the services of Piermaria Rossi, Lord of Berceto, and his son Guido, Capitano of the Republic of Venice. After 1492 he served as vicar general to the dioceses of Rimini, Ferrara, Florence, and Siena.

Printer attribution follows GW (contested by BMC and Indice generale VI). Recto of first leaf has old border rules in black ink; an English note on the author (c. 1880) is mounted to the flyleaf. 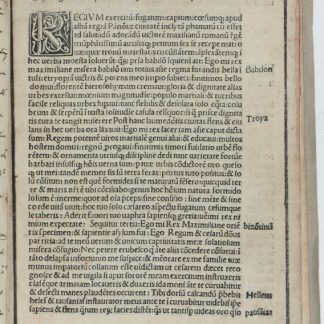