Haines, Stafford Bettesworth. Memoir to Accompany a Chart of the South Coast of Arabia.

Early British study of today's Yemen coast. Captain S. B. Haines led a party aboard the "Palinurus" in the 1830s to survey the almost unknown southeast coast of Arabia; he seized Aden in 1839 on behalf of the East India Company, for use as a coaling station for ships steaming to and from India. Appointed Political Agent by the Bombay Presidency of the EIC, Haines served in this capacity (without leave) for the next fifteen years, presiding over Aden’s rapid expansion as a fortress and as a port which by the early 1850s boasted a population of some 20,000. Haines’s deep personal commitment to the revival of Aden’s prosperity ultimately led to his tragic imprisonment in Bombay for debt and to his death (aged only 58) in 1860. But in South West Arabia his name lived on and for decades local tribesmen referred to the inhabitants of Aden as "Awlad Haines" ("Haines’s children"). These two articles, separated by six years, contain Haines's full account of the findings of the survey, with accompanying maps. Among the members of the party was James Wellsted, who during the course of the survey explored the island of Socotra, and also proceeded into the Arabian Peninsula as far as the Rub' al Khali. 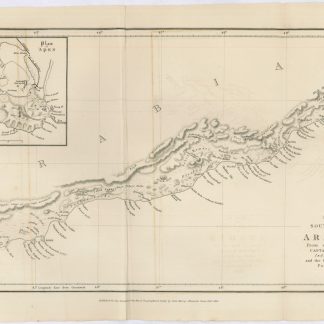