The "Austrian Embassy Reports on Arab Countries": a catalogue of and guide to all relevant documents in the Vienna State Archives formerly kept at the Imperial Internuncio and later the Embassy in Constantinople from 1750 to 1918. The documents relative to Arabia include numerous pieces on the Sherif of Mecca, the Wahhabites, the Pacha of Jeddah, Sheikh Faisal's threat to Hajj pilgrims, and British interests in the region; others relate to the Wahhabite movement in Syria, the English blockade of Mocha and various insurgencies in Yemen, as well as events in Arabic countries from Iraq and Kuweit to Algier and Morocco. "Old Austria, beyond suspicion of imperialistic designs or ambitions of colonialism, was vitally interested in preserving the Ottoman Empire and protecting both its own chartered rights and the rights of man in this enormous territory, as well as in advancing the local economic development, a process, indeed, in which the Habsburg Empire itself played an important part. The diplomatic reports reflect this situation. Striving as they did to represent the facts without any political bias, strictly according to facts, they are of especial interest to the historian. They comprise a vast area stretching from the Arabian Gulf to Morocco on the Atlantic" (introduction). 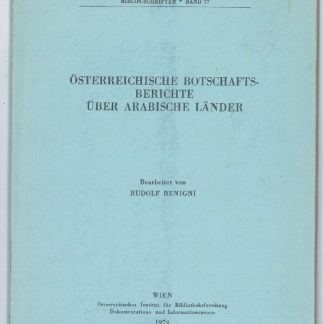