The first months of the Mesopotamian campaign against the Ottomans

Detailed official military reports from the war theatre in the Gulf region, issued by Generals W. S. Delamain, A. A. Barrett, and J. E. Nixon between February and August 1915 (covering operations as early as November 1914), in the early months of the British Empire's Mesopotamian campaign against the Ottoman Empire, while T. E. Lawrence was still posted to the military intelligence staff at the Arab Bureau in Cairo.

A few edge and corner flaws to the first few pages. 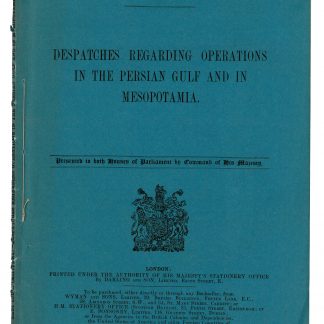