From the library of Francis Drake

Vincent, William. The Periplus of the Erythrean Sea [...] Containing an Account of the Navigation of the Ancients [...] With Dissertations.

First edition of this rare Middle Eastern geography, published in two parts: 1. From the Sea of Suez to the Coast of Zanguebar; 2. From the Gulph of Elana, in the Red Sea, to the Island of Ceylon. Includes an extensive discussion of the Arabian Peninsula, including sections on Myos Hormus, the Wealth of Arabia, the Coast of Yemen, Aden, Mokha and Oman, Oriental Commerce by the Gulph, etc. Among the plates are a map of the western Arabian coastline, a chart of the Red Sea, and al-Idrisi's famous world map, "a pinnacle of mediaeval cartography as well as of the history of geographical research" (cf. Lex. z. Gesch. d. Kartographie, p. 325; Tooley II, 405). William Vincent (1739-1815) served as headmaster and later Dean of Westminster, and "ancient geography was the subject which Vincent made his chief study" (DNB). Also includes Vincent's edition of the Greek text of the voyage of Nearchus.

Covers rubbed; corners bumped. Traces of old stamps, removed from title pages and half titles. Somewhat browned and brownstained. From the library of the antiquary and bookseller Francis Drake (1828-85), a descendant of the like-named English navigator and privateer, with his engr. bookplate to pastedowns. A good, wide-margined copy. 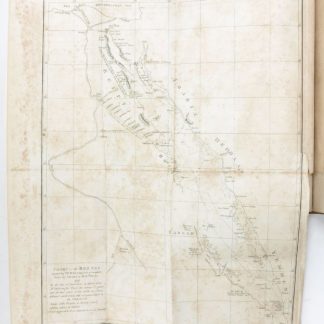