Important letter with political content, written to the German politician and stenographer Franz Jacob Wigard (1807-1885), then a member of the Frankfurt Assembly, the first freely elected parliament for all of Germany. In his peremptory letter, Wagner laid down what in his opinion were the principles that ought to guide the Frankfurt assembly. He looks to the meeting of the German National Assembly in Frankfurt to assume unified power from the old Bundestag, to introduce rearming the German people, to make a defensive treaty with France and, finally, to create a rational and coherent German nation out of the myriad of princely states, both large and small, overcoming the opposition of the Princes themselves, emphasizing that only then can the Assembly begin its work and without which all their good work so far will be undone. "I am apprehensive of much harm", he wrote, "if the German Parliament does not in the first instance resolve on the following: (1) that Parliament at once vests the sole constitutive power in itself, as well as the authority to nominate a Provisional Executive from among its members; (2) immediate introduction of Folk-arming after the model known to us; (3) an offensive and defensive alliance with France [...] Let the fourth step be the Territorial question of the German States. If the Frankfort Assembly intends to create a constitution that will unite Germany, it must first address itself to the inequality of the individual States: it must appoint a commission to formulate proposals for a rational and natural construction on the basic principle that no single State shall have less than four or more than six million inhabitants. That is the definitely decisive point, without the establishment of which all our labours would be merely patchwork [...]".

A fine letter outlining Wagner's political views and his desire to see a unified German nation, in the wake of the 1848 Revolution in France and turmoil within Germany. Barricades were put up in Dresden and the king was presented with demands for constitutional reform. Wagner joined the revolutionaries, hoping that this would lead to the reform of a National Theatre. His letter was prompted by the convening of the National Assembly at Frankfurt on 18 May, and is addressed to the Saxon Delegate at the Assembly, Jacob Franz Wigand, who had earlier been dismissed from the University at Dresden for his radical political views.

Published in the "Sämtliche Briefe", II, no.256, after a press-cutting in the Wagner Archives and without reference to the original. 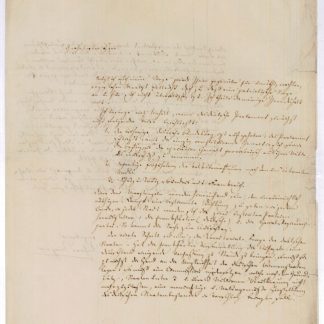