Important travelogue on Persia, with 15 plates and 2 maps

An important account of Persia with detailed descriptions of the antiquities, archaeological sites, and the ancient history of the country. In 1841, de Bode travelled from Tehran to Isfahan, Persepolis, Shiraz, Kazeroun, Shushtar, Susa, Khorramabad and back to Tehran. "Luristan" (modern "Loristan"), or the land of the Luri people, is a western province of Persia; its main city is Khorramabad. "Arabistan" (now "Khuzestan") is located in the Eastern Persia and the main city is Ahwaz.

De Bode provides a detailed account of the ancient cities of Persepolis, the ceremonial capital of the Ahaemenid Empire, and Susa, which used to be the capital of the legendary civilisation Elam, mentioned in the Bible. In his narrative he describes numerous archaeological sites, lists the names of settlements, describes the history of the local tribes and their manners and customs. In a supplement he published his observations on the routes of Timur and Alexander the Great, who crossed south-western Persia during their conquering marches. "It is with the view of rescuing from a second oblivion this once classical ground that the Author has endeavoured to draw aside a corner of the veil which still covers this mysterious region" (preface). One of de Bode's advisors whom he acknowledges in the preface was the renowned assyriologist Sir Henry Rawlinson (1810-95), an expert in Persian and Indian vernacular languages who explored Susiana and Persian Kurdistan and was called by Budge, in "The Rise and Progress of Assyriology" (1925), "the father of Assyriology" (ODNB).

"Clement Augustus de Bode, a member of the Russian legation in Tehran, filled some empty spaces in existing maps" (Howgego). "It is mostly a travel book [...] the author gives a good picture of tribal life and especially the political situation in Fars; principally the hostility between the Qashqai tribe which controlled Shiraz. There are also descriptions of historical sites and monuments along the way" (Ghani, p. 93). 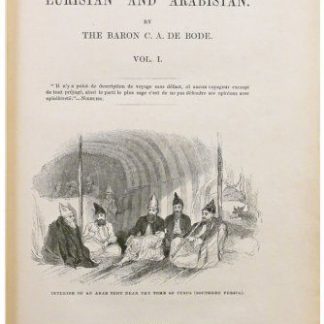