Deluxe edition heightened with silver and gold, bound by J. Mackenzie, bookbinder to the King

Tournaments and hastiludes began in the 11th century as both a sport and to provide training for battle. The sport of jousting grew out of the tournament and, by the 15th century, the art of tilting became quite sophisticated. Horses - as shown here on the 24 spectacular plates heightened with silver and gold - were specially bred for the joust. The present work, a rare incunable of lithography hardly ever encountered complete, is also an early example of lithography used to produce a perfect facsimile, namely of a manuscript tournament book kept at the Royal Library in Munich. The facsimile was produced by Theobald and Clemens Senefelder, brothers of the famous Alois Senefelder who had invented the process. Most known copies are illuminated in the very highest quality and heightened in gold and silver; Dussler refers to these copies as "de-luxe editions". Our copy comprises fascicles 1-6 (out of 8), containing 4 (of 5) introductory lithogr. leaves, pp. I-IV and 1-28 (of 60) and 24 (of 31) coloured lithogr. double-page plates, each with descriptive text leaves. Wants fascicles 7 and 8 (plates 25-31 and their descriptive text leaves), a lithogr. half-title, and the introductory text of pp. 29-60 (chapters III and IV). Very slight brownstaining throughout; double-page plates show offsetting of the silver heightening to the opposite pages.

Sumptuously bound in gilt morocco by John Mackenzie, bookbinder to the King, in matching solid slipcase (the binding showing but very slight traces of wear, while the protective slipcase is rubbed and somewhat scuffed). "The work of our binder, John Mackenzie, spanned the whole of the first half of the 19th century. In a circular issued in 1840, he described himself as 'Bookbinder to their late Majesties King George IVth & King William IVth', as a binder with 40 years of experience, and as a craftsman with one of the largest collections of brass binding tools in London (Howe). His materials and work are consistently of very high quality, as the present volumes attest; the Schiff collection had two of his bindings" (Phillip J. Pirages, cat. 63, item 325, describing a ten-volume-set of Lysons's "Magna Britannia" bound by Mackenzie).

Of the utmost rarity: the last copy at any auction was recorded in 1976 (Christie's, 2 April, lot 121: the same number of plates as ours). 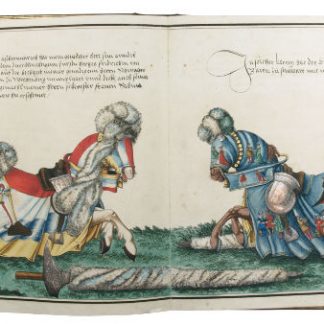