Belon's account of his extensive travels in the Levant, with 44 woodcut illustrations

4to. 3 parts in 1 volume. (12), 212, (1) ff. With title in woodcut border with Cavellet's device and initials at the foot, each part-title with Cavellet's woodcut device, 1 folding woodcut map (315 x 350 mm) showing Mount Sinai, 44 woodcuts in the text (including a portrait of the author by Geoffroy Tory), and numerous fine decorated initials. Main text set in italic, with preface and commentary in roman. Overlapping vellum (ca. 1600?), sewn on 5 cords, laced through the joints.

Third edition of Belon's "Observations", the fruit of his extensive travels in Greece, Turkey, Egypt, Palestine, Lebanon and Syria from 1546 to 1549. The naturalist Pierre Belon (c. 1518-64), famous for his works on ornithology, was attached to the French embassy to the Ottoman Empire, led by Gabriel de Luetz (Luez, Luels) d'Aramont, who aimed at convincing Suleiman the Magnificent to join forces against Charles V. The envoy sailed for Venice in December 1546 and proceeded to Croatia. Here Luetz continued overland to Adrianople (Edirne), while Belon sailed for Istanbul by way of Greece, visiting Lemnos, Macedonia, Crete and Kavala en route. He reached Istanbul in August 1547, explored the city and continued to Alexandria, while Luetz accompanied Suleiman to Persia. Belon's journey continued to Cairo, Mount Sinai, Jerusalem, Damascus, Baalbek, Aleppo, and again to Turkey.

Unlike many contemporary travel writers, Belon does not elaborate on extraordinary adventures, but rather limits himself to detailed observations on mammals, fish, snakes, birds, plants and the manners and customs of the peoples he encountered, commenting only on what he himself had witnessed. The fine woodcuts, attributed to Arnold Nicolai and Pierre Goudet (Gourdelle), include a map of the Dardanelles (Hellespont), a folding map of Mount Sinai, a view of Alexandria, coins with Arabic inscriptions, 3 illustrations of Egyptian costumes, a giraffe, chameleon and, surprisingly, a flying dragon and an armadillo.

The first edition was published in 1553, illustrated with 35 woodcuts only, followed by a second, augmented edition in 1554. The present edition was a joint publication of Guillaume Cavellat and Gilles Corrozet, comprising two issues with either Corrozet's or Cavallet's name in the imprint. 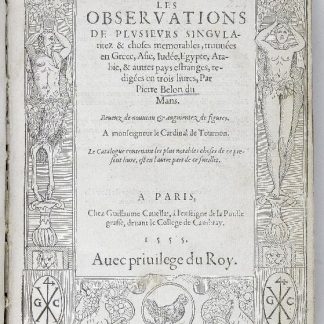