The first illustrated edition (in its second issue) of one of the most famous early travel reports and the first Western encounter with the Arab world. Of the utmost rarity; not a single copy could be traced on the market for the past sixty years; not a single copy in the USA (cf. OCLC).

The "Itinerario" contains the first printed eyewitness account of any place in today's United Arab Emirates: on his return journey from Mecca (which he was the first Westerner to describe), Varthema visited Ras al-Khaimah ("Giulfar") and portrayed the city as "most excellent and abounding in everything", with "a good seaport", and whose inhabitants are "all Muslims". While Montalboddo's famous anthology of discoveries, printed in 1507, contained the first printed reference to the Arabian Gulf region, it was Varthema's work, published only three years later, that offered the first actual report from the region by a Western traveller who had visited the coast.

All early editions of Varthema’s “Itinerario” are exceedingly rare (even the 2013 Hajj exhibition at the MIA, Doha, only featured the 1654 reprint; cf. below). This - the first illustrated one - is certainly the rarest of them all: international auction records list not a single copy. The 1510 editio princeps was offered for US$ 1 million at the New York Antiquarian Book Fair in April 2011.

Varthema, a gentleman adventurer and soldier from Bologna, left Venice at the end of 1502. In 1503 he reached Alexandria and ascended the Nile to Cairo, continuing to Beirut, Tripoli, Aleppo and Damascus, where, adopting Islam and taking the name of Yunas, he joined a Mameluke escort of a Hajj caravan and began the pilgrimage to Mecca. Varthema was amazed by what he observed: "Truly I never saw so many people collected in one spot as during the twenty days I remained there", he begins, and arriving at the Great Mosque, continues, "it would not be possible to describe the sweetness and the fragrances which are smelt within this temple." Thanks to his knowledge of Arabic and Islam, Varthema was able to appreciate the local culture of the places he visited. Impressed and fascinated, he describes not only rites and rituals, but also social, geographical, and day-to-day details. "I determined, personally, and with my own eyes", he declares in the prefatory dedication, "to ascertain the situation of places, the qualities of peoples [...] of Egypt, Syria, Arabia Deserta and Felix, Persia, India, and Ethiopia, remembering well that the testimony of one eye-witness is worth more than ten hear-says." His good fortune did not continue unabated, however: after embarking at Jeddah and sailing to Aden, he was denounced as a Christian spy and imprisoned. He secured his release and proceeded on an extensive tour of southwest Arabia. Stopping in Sanaa and Zebid as well as a number of smaller cities, he describes the people, the markets and trade, the kind of fruits and animals that are plentiful in the vicinity, and any historical or cultural information deemed noteworthy. Returning to Aden, and after a brief stop in Ethiopia, he set sail for India. In addition to visiting Persia, Varthema explored the coasts of Malabar and Coromandel, including a very documented stay at Calicut at the beginning of 1505. He also purports to have made extensive travels around the Malay peninsula and the Moluccas. Returning to Calicut in August 1505, he took employment with the Portuguese at Cochin and, in 1508, made his way back to Europe via the Cape of Good Hope.

Bound with this work are five other 16th century imprints: II: Giovio's report on Russia is based on conversations with the Russian envoy Dimitry at the court of Pope Clement VII in Rome.

III: "The second printed book on Russia" (NUC), intelligence on Russia gathered by the later bishop of Vienna in Tübingen in 1525 from the envoy of the Grand Prince Ivan Vasilievitch.

IV: "Very rare anti-Muslim and anti-Semitic volume, of which this is the first edition to include the third tract by Victor de Carben" (Schreiber). Contains the report by Georgius de Hungaria, who was captured in 1438 during the siege of Mühlbach and was sold into Turkish slavery. Also includes the anti-Muslim treatise of Ricoldo (1242-1320) and the anti-Semitic pamphlet of Victor de Carben (1422-1515), a converted Rabbi from Cologne.

V: Fine Strasbourg humanist edition of two works by the great Neo-Platonist Marsilio Ficino (1433-99), including his 1474 apology of Christianity against Islam and Judaism.

VI: First Latin edition, edited by Menrad Molther, with his dedication to Georg von Morsum. The Armenian prince Haytho reached Poitiers in 1306 and there dictated his history of the Middle East since the first appearance of the Mongols.

Spine slightly rubbed; some browning, annotations and occasional worming. Ms. index of all works contained on front pastedown. Removed from the Donaueschingen court library with their stamps on first and final page. 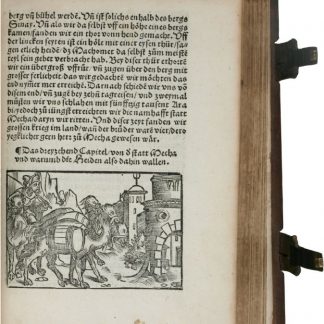