Wittgenstein's proof copy of Hänsel's essay on Goethe's "Farbenlehre" with his often scathing autograph annotations (in German): "If you only would shut up and keep out of it!" (p. 122), "You are not Goethe" (p. 124), "Christian peoples are not Christianity" (p. 145).

"Hänsel was an uncommonly well-read man; above all, he appreciated Pascal, St. Augustine, Kierkegaard, and Goethe, about whom he wrote numerous essays. He studied modern issues of Christianity and the church, the philosophy of values, epistemology, and basic questions of education. Hänsel was considered a conservative: like Wittgenstein, he favoured 'tradition' in matters of literature, art, music, and 'the modern life' in general. For Wittgenstein, Hänsel embodied both the classical Austrian tradition and the faculty to perform an observant examination of current trends in culture and criticism. Harshly though Wittgenstein chastises Hänsel, his letters repeatedly end with his criticising the failures attributed to his friend even more sharply in himself" (cf. Ilse Somavilla, Der rechte Ton, in: ibid., p. 325). 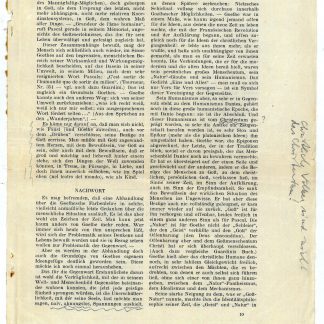