3 vols. Large folio (70 x 55 cm). With 150 striking coloured plates, all lithographed on stone, printed and coloured by J. T. Bowen of Philadelphia, after drawings by John James and John Woodhouse Audubon, and the backgrounds after Victor Audubon. Each volume also with a title-page and a list of contents. Late 19th century black morocco, with gold-tooled spine, red cloth sides and marbled endpapers.

First edition of the extraordinary coloured plates of quadrupeds by the world-famous French-American naturalist and painter John James Audubon (1785-1851), whose "Birds of America" was purchased at a Christie's auction for $11.5 million in March 2000, setting a world record for the most expensive book ever sold (surpassed only by the 1640 "Psalm Bay Book", sold for $14.2 million in November 2013). The plates in the present work are considered the finest animal prints ever published in America. Unlike the "Birds", it was produced entirely in the United States, making it the "largest successful color plate book project of 19th-century America" (Reese).

After the publication of his highly acclaimed "Birds of America", Audubon settled on the Hudson River and began working on the present series to document the animal life of North America. The plates were first published in 30 parts of 5 plates each, and three separately published accompanying text volumes, written by John Bachman, appeared between 1846 and 1854. A second edition was published in 1856, but "the first edition is by far the best" (Sabin).

Title-pages show some small scuff marks, a few plates with minor, unobtrusively repaired tears along the edges. Binding skillfully restored. A complete set, with most plates in fine condition. 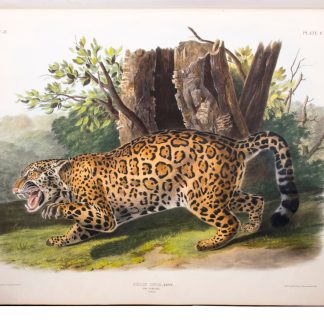