A 1718 voyage from Goa to Macao, published in Lisbon

8vo. (16), 427, (1) pp. With each page in a frame of thick-thin rules, mitred at the corners, 4 woodcut headpieces (plus 1 repeat) including 1 with the Portuguese coat of arms, 1 woodcut tailpiece, woodcut decorated initials. Contemporary tanned sheepskin, gold-tooled spine with red morocco label, rebacked.

Second edition (after the 1718 Macao edition printed entirely from woodblocks) of a journal of the voyage of António de Albuquerque Coelho (ca. 1682-1745) from Goa in India to Macao on the coast of southern China. The journal was written by João Tavares de Velez Guerreiro, a captain in the Portuguese navy serving in India, who accompanied the governor on the voyage as his chief of staff. Coelho had been appointed governor of the city of Macao in 1717, and they arrived there in May 1718. They travelled via Madras, through the Malay peninsula and along the coasts of Indochina and China. Part 1 gives an account of the voyage itself and part 2 an account of their stay in Johor at the southern tip of the Malay peninsula, where they played a role in a Sumatran adventurer's coup d'état. The publisher Jaime (or Jayme) de la Te y Sagau, better known for his musical publications and his own musical compositions, dedicated the book to the Duke of Cadaval, ending the dedication with a sonnet. It mentions the first Duke, Nuno Álvares Pereira de Melo, but he appears to have died in 1725 or 1727, so it may be addressed to the third Duke Jaime (1684-1749).

Printed on thick paper. With a 1732 inscription on the title-page. The first few leaves are slightly tattered at the fore-edge, not approaching the text, and have been professionally restored, and there are some stains on the fore-edge. Boards show a few minor cuts and scrapes, but binding remains in good condition. A valuable eye-witness account of India, Southeast Asia and China in 1718. 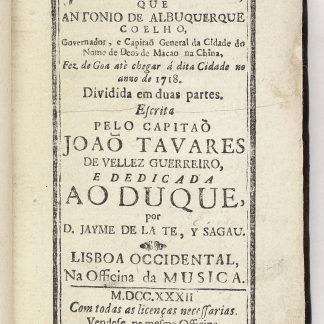