Khor Fakkan, where "there are pretty good refreshments to be had"

Hamilton, Alexander. A New Account of the East Indies. Giving an exact and copious description of the situation, product, manufactures, laws, customs, religion, trade, etc. of all the countries and islands, which lie between the Cape of Good Hope, and the Island of Japon.

Second London edition of this important work, first published in Edinburgh in 1727, "which remains to this day one of the most valuable first-hand histories of English merchant shipping in the Indian Ocean and East Indies" (Howgego). It covers "the whole of the Orient" (Hill) from Ethiopia to Japan and is very strong on India (some 20 chapters, not counting Bengal, which is described separately), but also includes an extensive section on the Arabian Peninsula: chapter IV "gives a little description of the coast of Arabia the Happy, from Mount Sinai to Mocha, with some observations on the religion, customs and laws"; chapter V "gives a description of the Immaum of Mocha's country, particularly its situation, laws, customs and commerce"; chapter VI "contains a description of Aden [...], also an account of the sea-coast of Arabia petraea, as far as Muskat and Bassora", chapter VII "treats of the kingdom and city of Muskat, and of their religious and civil customs [...] and a little account of the sea-coast of Arabia deserta, as far as Bassora", while chapter VIII "gives an account of Bassora City, and that part of Arabia deserta". Includes a rough, but apparently original map of the Gulf, showing "Barreen Island", "Cape Mussendon", and little detail along the Peninsula's northeastern coast in between save for a place labelled "Zoar", here not indicating Sohar in Oman but clearly referencing the area of the present-day Emirate of Sharjah (even Niebuhr's 1765 map still shows a town named "Seer" - Sir, Julfar - opposite the island of "Scharedsje"). The text mentions the region's trade in horses and pearls, stating, "There are no towns of note between Muskat and Bassora, but Zoar, and but very few inconsiderable villages; but there are two or three pretty convenient harbours for shipping. The southernmost is about 6 leagues to the southward of Cape Mosenden, called Courfacaun. It is almost like Muskat Harbour, but somewhat bigger, and has excellent fresh water from deep wells, about a quarter of a mile from the landing place. The village contains about twenty little houses; yet there are pretty good refreshments to be had there [...]".

In India, Gujarat and Bombay are covered particularly extensively, and the illustrations include not only a detailed coastline map of the subcontinent, but also several plates showing Ganesha, the elephant-headed god; a religious procession involving an elaborate wheeled scaffold from which men are hung; the temple of Jagannath; and the notorious "Juggernaut" car.

The Scottish captain Hamilton went to sea, in his own words "very young", in 1688, and travelled as far as the Barbary coast before basing himself in Surat and trading and travelling all over the Indian Ocean, "visiting, it is said, every port between the Cape and Canton" (Howgego). He made a reputation for himself as a foul-mouthed, resourceful and bold operator fending off Baluchi robbers, treacherous governors and Indian pirates. 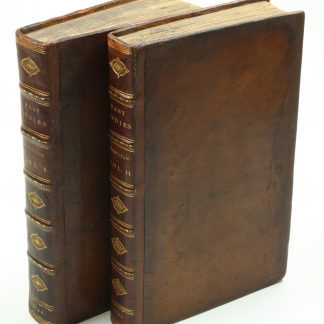 You're viewing: Hamilton, Alexander. A New Account of the East Indies. Giving an exact and copious description …London, 1744. € 9,500.00
Add to cart