Fantastic (partly true?) adventures in Ottoman Africa, by an English merchant captured by Barbary pirates in 1648

Roberts, A. The adventures of (Mr T. S.) an English merchant, taken prisoner by the Turks of Algiers, and carried into the inland countries of Africa: with a description of the kingdom of Algiers, of all the towns and places of note thereabouts. Whereunto is added a relation of the chief commodities of the countrey, and of the actions and manners of the people. Written first by the author, and fitted for the publick view by A. Roberts.

First edition of this extraordinary account of an Englishman’s capture by Barbary pirates and subsequent adventures as a slave in Algeria. The narrative is framed as an authentic journal of a deceased traveller, prepared for the press by a friend of the departed. Through this mechanism the reader is taken into a proto-novelistic fantasy, albeit one that must have been informed by genuine experience of Eastern travel. As a slave under numerous masters the author tricks his way variously into employment as the cook to the King of Algiers, is then demoted to Keeper of the King’s Bath and secretly fathers a daughter with one of the King’s wives. After an unsuccessful stint as a gardener’s assistant he journeys in the service of an officer, collecting tribute money with the Algerian army and offers his services as an advisor to the Ottoman governor of Tlemcen. He recounts observations on the various peoples encountered and their customs and peculiarities, marvelling at flying serpents, lions and ostriches and skirmishing with an army of Arabs. Against a backdrop of mosques, minarets and palaces, the narrative is peppered with anecdotes of meetings with Barbary pirates, European renegados, and dalliances with alluring women of the Maghreb.

The author takes particular relish in recounting the details of his sexual adventures: "the women in this country keep much at home, but their minds and affections are more wandering abroad, because they are so recluse; whereas if they had as much liberty as in other countries they would not be so furiously debauch’d: their husbands keep strict guard over them, that when they can escape their eyes, they give the reins to their passion, and labour to satisfy themselves more abundantly; stolen waters are sweet: the more they are forbidden and hindered from variety, the more pleasure and satisfaction they fancy in it [...] had my design been to make conquests in the Empire of Love, I think none could have been more happy [...] this good opinion of my ability spread & increased wonderfully in the town [...]". A separate appended section offers directions for navigating the Barbary coast. The work is of value both as a travel narrative and as a proto-novel reflecting the European fascination with the Orient. This is one of four journeys undertaken by Englishmen in the Ottoman Mediterranean analysed recently by Gerald Maclean in his 2004 study "The rise of Oriental travel: English visitors to the Ottoman Empire, 1580-1720". 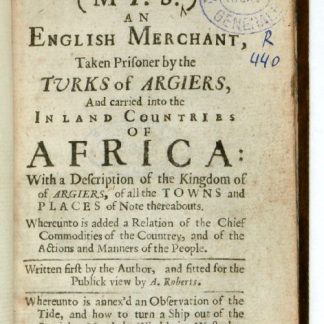