Barretto, Joseph. A Dictionary of the Persian and Arabic Languages.

First edition of this early Arabic and Persian dictionary, long considered one of the best of its kind (cf. Encyclopaedia Americana X, 39). Prepared by Joseph Barretto junior (d. 1825), a Calcutta merchant and banker. The Barrettos were a Portuguese family long established in India, producing two governors of the country. "Arabic, Persian, and Urdu printing in India really began in Calcutta under the East India Company from the 1780s onwards. Of the three languages, Persian was paramount to the Company's interests" (Ency. of Islam VI, 805).

Small hole to f. C2 of vol. 1 (affecting one word of the text); lower corner of final leaf of vol. 2 torn away (affecting one letter of text); some light foxing throughout (more so to initial and terminal leaves). Withdrawn from the Glasgow University Library with their bookplate and withdrawal stamp to pastedowns. Rare. 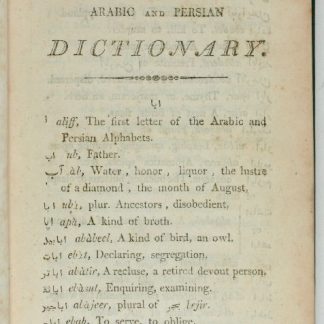