To an undisclosed recipient, i. e. Karl Theodor von Küstner (1784-1864), director of the court theatre at Berlin, on the proposed world premiere of "Der Fliegende Holländer" ("The Flying Dutchman"), which was accepted for staging by Küstner's predecessor Count Redern by recommendation of Giacomo Meyerbeer. Since Redern and Küstner had both omitted to give a concrete date for staging, Wagner is now asking Küstner to tell him the current state of affairs. Moreover, he informs him that his "Rienzi" will be staged at Dresden within the next month, and invites him to visit the performance in case that he stays at Dresden at that time.

One month after this letter, Wagner was celebrating the premiere of "Rienzi" at the Dresden Court Theatre (20 October), one of his first major successful premieres. The "Flying Dutchman" was also first staged in Dresden (January 2, 1843) under his direction. 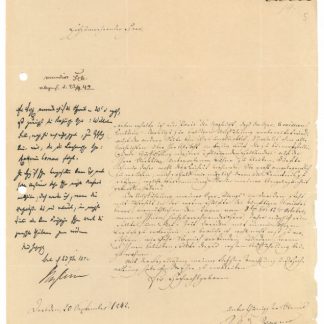