The Ottoman state and its officials in contemporary portraits, coloured by hand

First edition of this valuable and beautifully illustrated survey of the costumes worn at the court of the Ottoman Empire, published with the text in both French and Turkish. Ministers, state officials and military officers (including intelligence service) are shown in full costume with their functions captioned in Arabic and French below. Although the lithographic title states 'Tome 1er', no further volume was published in either language.

Arif Pasha fought against the Greeks at Athens and at Euboea (1826-28), and in Syria against Mehmet Ali. His career included a number of missions for the Sultan and his appointment, in 1861, as governor of the province of Silistria. 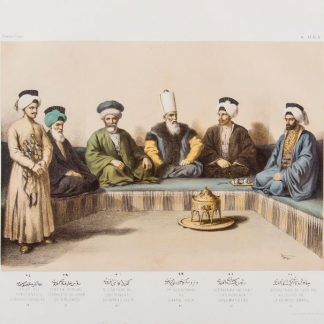