An Arabic merchant; an Emir descended from Muhammad; pilgrims returning from Makkah

These explanations of the Ottoman and Arabian costume engravings based on the account of Nicolas Nicolay d'Arfeuille and on the Byzantine prophecies of Thomas Artus, Sieur d’Embry (c. 1550-after 1614), who is known for his satirical take on the French court, "Les Hermaphrodites", were variously published throughout the 17th century as an appendix to the history of the Ottoman Empire of Chalkokondyles, but were also issued separately, as is the case with the present copy. The repeated plate 60/61 and the duplicated plate number 64 identify this as Guillemot's 1632 Paris edition. Among the plates are an "Arabic merchant", an "Emir, descended from Muhammad", "Pilgrims returning from Makkah", a "Persian gentleman", a "Turkish lady dressed for going to town" etc.; at the end: prophecies foretelling the downfall of the Ottoman Empire. 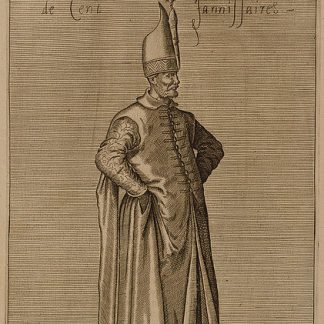