First publication of these four Turkish letters. Busbecq, a Fleming, was Emperor Ferdinand's ambassador at the Porte from 1555 to 1562. "The first collected edition of all four letters appeared at Paris in 1589. The first letter was printed at Antwerp in 1581, and the second in 1582" (Atabey). Busbecq's letters contain observations of Turkish life and analyses of the Ottoman state.

Insignificant browning; a few old underlinings. Title and endpapers have dated ownerships. Of the utmost rarity, no copy at auction internationally (only the second edition). 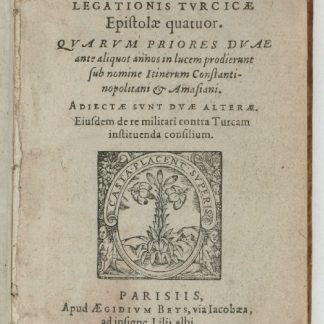