The Arabian Gulf, and all the country of the tent-dwellers and the Sheikh-governed tribes

Early Latin translation of the geography of Strabo, who had visited Egypt and sailed up the Nile in 25 BC.

Even in the introductory chapters, Strabo provides important details on the Arabian Peninsula: "Adjoining the Ethiopians, a needy and nomad race, is Arabia: one part of which is distinguished above all other lands by the title of Felix [i.e., Hedjaz and Nejd-ed-Ared], and the other, though not dignified by that name, is both generally believed and also said to be pre-eminently blessed. Though Homer knew of Arabia Felix, at that time it was by no means wealthy, but a wild country, the inhabitants of which dwelt for the most part in tents. It is only a small district which produces the aromatics from which the whole territory afterwards received its name, owing to the rarity of the commodity amongst us, and the value set upon it. That the Arabians are now flourishing and wealthy is due to their vast and extended trade" (p. 30f.); "Arabia Felix is bounded by the entire Arabian and Persian Gulfs, together with all the country of the tent-dwellers and the Sheikh-governed tribes. [...] Beside the ocean the country is tolerably fitted for habitation of man, but not so the centre of the country: this for the most part is barren, rugged sand desert. The same applies to the country of the Troglodytic Arabians and the part occupied by the fish-eating tribes" (p. 90f.) Furthermore, chapters 15 and 16 are devoted entirely to the Orient (chapter 16 on Arabia in particular), while the final chapter 17 discusses Egypt and Libya.

The fine title border shows King Solomon among the philosophers and poets of Greco-Roman antiquity; at the bottom, the Nine Muses lay a wreath on the head of Homer. Occasional insignificant brownstaining. The uncommon binding is slightly rubbed; some edge defects professionally restored. Title page has contemporary ms. ownership of the classical scholar Johannes Lyresius from Kleve, professor of Greek at Ingolstadt from 1568 onwards. A few marginalia and underlinings by his and later hands. 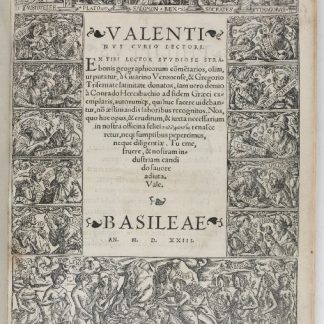