The present volume constitutes an impressive document of Stravinsky's life during the October Revolution. A composition for his children, this work was penned in 1914/15, shortly after leaving Russia forever and settling down into Swiss exile, all connections to his Russian homeland having been severed by the Great War. The events of the war also meant that Stravinsky was unable to solicit commissions, receive royalties, or even contact his publishers; his collaboration with Djaghilev had more or less ground to a halt, their tour having returned hardly any profit. It was at this time that Stravinsky had to rely upon the generosity of wealthy Swiss patrons such as Madame Auberjonois, who was the first wife of the post-Impressionist Swiss painter René Auberjonois, mother of author Fernand Auberjonois, and later grandmother of the American actor René Murat Auberjonois. Stravinsky had met René Auberjonois in the fall of 1917, during the planning stages of "Histoire du Soldat", and he later became an important acquaintance of Stravinsky's. The present copy must have been presented during the early years of their friendship. 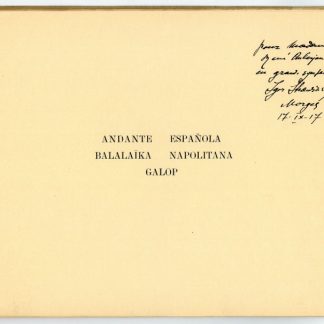