"The news from Germany are extremely sombre"

Benjamin, Walter, German literary critic and philosopher (1892-1940). Collection of letters by Walter and Georg Benjamin as well as by third parties.

Comprehensive family correspondence centered around Walter Benjamin and his brother, the physician (and later resistance fighter) Georg, Georg's fiancée Grete Kliem, and her friend Lisabeth. The 18 letters and postcards highlight the ideological distance between the socialist Georg Benjamin, from wealthy Jewish merchant stock, and his bourgeois, conservatively Christian fiancée, which ultimately led to the couple's separation. Georg Benjamin, who was to be murdered at Mauthausen concentration camp in 1942, instead married Hilde Lange in 1926. The jurist Lange later served as minister of justice to the German Democratic Republic, earning her the nickname "Bloody Hilde".

On 21 January 1923, Walter Benjamin writes to his brother Georg: "When I received your message, I once again saw how little feminine skill for investigation I possess in matters of marriage and engagement, for if I had but a small measure of it, I could well have guessed at the purpose of your frequent trips to Hagen [where Grete Kliem lived]. With as much heartfelt warmth as surprise I congratulate you and your future wife on your decision [...] Dora will stay here another while; her recuperation is necessarily progressing slowly, but she is gaining weight. Still, the doctor has advised rest for the foreseeable future [...] I am working here all well as I can, preparing the edition of my friend's [Fritz Heinle's] posthumous papers. The news from Germany are extremely sombre [...]".

Includes: 1) Postcard by various undersigners to Hilde Lange, sending congratulations on her betrothal. 2) Addressed envelope from Georg Benjamin to his fiancée. 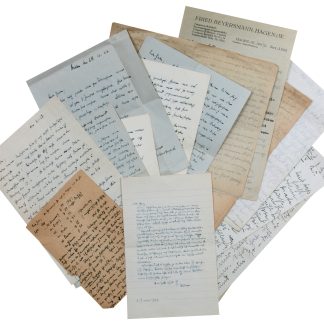