Discussing the final edition of Tannhäuser

Important letter, in German, to the publisher Adolf Fuerstner in Berlin about the publication of the final edition of "Tannhäuser", recorded in Wagner's catalogue of works as "state 4", which since 1876 has remained to this day the most widely used and staged version. Save for a short quotation in a 1977 Stargardt catalogue, this letter is unpublished and therefore especially valuable. Fuerstner had taken over the rights from Meser at Dresden, who had published the first edition in 1845. Now, Wagner sends him the signed contract, announces the revised full score, explains the main changes he has made, and remains in joyful anticipation of receiving the agreed sum of 3,000 Goldmarks. Moreover, he reports that the Russian-born pianist and composer Josef Rubinstein, a friend and ardent admirer of Wagner's, will finish the arrangement of the 'Venusberg' scene within the next few days and send it to Fuerstner: "Today I am posting the fully revised full score of my new 'Tannhäuser' to your address, enclose the contract, with my signature, and expect the payment of 3,000 Marks. Mr. Josef Rubinstein will have completed the arrangement of the 'Venusberg' within the next few days and will send it to you as well. I infer that you are, at the moment, mainly interested in the Venusberg scene [Act I]. When performed separately and not in immediate conjunction with the overture, this scene has a special beginning which is both enclosed with the score and is also being used by Rubinstein for his arrangement of this separate piece [...]". In its present form, however, it is abridged, and thus Wagner achieves a very skilful dramatic climax in the 5th state. "[...] However, for a separate edition of the unabriged overture, as an independent concert piece, I have introduced a change in the violins which you will glean from the inserted sheet in the old score. I strongly desire that the full edition of this work, which has been significantly revised in a great many parts, be undertaken quite soon […]". Clearly, Wagner was impatient to see his "final" version performed as soon as possible.

Rubinstein was famous for excellent pianoforte transcriptions including the "Ring des Nibelungen"; in 1869 he was appointed "Kammerpianist" by Grand Duchess Helena. 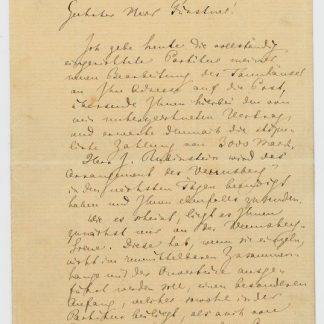