The Hammer of Witches - editio princeps

First edition of the notorious "Hammer of Witches", which laid down procedures for finding out and convicting witches. Due to the innovation of the printing press, it contributed significantly to the early modern witch craze. "The most important and most sinister work on demonology ever written. It crystallized into a fiercely stringent code previous folklore about black magic with church dogma on heresy, and, if any one work could, opened the floodgates of the inquisitorial hysteria [... it was] the source, inspiration, and quarry for all subsequent treatises on witchcraft" (Robbins, Encyclopaedia of Witchcraft and Demonology). The book was published and republished in at least 13 editions up to 1520, then revived from the late 16th century, undergoing at least 16 editions between 1574 and 1669, as well as numerous editons in German, French and English. Complete copies of the first edition are rare, and only a few copies are found in American institutions.

Upper cover stained and soiled, first three pages of text with some soiling and staining, neat repair to final printed leaf. All in all, a remarkably fine, clean copy from the famous Donaueschingen library of the princes of Fürstenberg with their printed spine title and shelfmark "298" on the spine label (repeated in pencil on recto of f. 1). 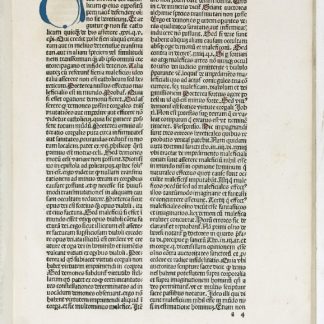