A fine post-incunable from the press of Wilhelm Schaffner from Rapperswyl, famous for having printed the first edition of the "Hortulus animae" in 1498. All of his productions are rare. The present collection of sermons had first appeared in 1501.

The eighteen essays, which form a single treatise, warn the various classes of human society to guard against sin in its many forms. "Much of this is the common, dry stuff of scholasticism, but several passages prove that the author cannot have been lacking in the gift of wit when he preached from the pulpit. Among these paragraphs is the fourth, directed against wives, widows, and virgins: some women (writes Morgenstern) will beautify themselves when they visit public houses or other places where they may meet strangers, and say they do so only to please their husband. Yet this is but a lie, for when they return home, they will remove their jewelry and sit by their husband like a hairy night owl, caring little about their adornment" (R. Cruel, Geschichte der deutschen Predigt im Mittelalter [1879], p. 569 ff., also citing several methods how women are said to contrive to obtain beautiful objects at their lovers' expense).

Spine a little duststained. Interior shows light worming, more pronounced near the end. Lower corner of fol. G5 torn away without loss to text; a more substantial edge defect to final leaf of index remargined (likewise without loss to printed text, but some loss to contemporary manuscript notes in Latin on blank verso). A final blank leaf has been appended, using old paper. A contemporary annotation to fol. a5v. In all a good copy.

Provenance: from the library of the noted economist Oskar Morgenstern (1902-77), whose purchase of the volume (probably prior to his emigration in 1938) may have been occasioned by the author's name. In collaboration with the mathematician John von Neumann, the German-born Morgenstern, who taught at Princeton University, founded the mathematical field of game theory and its application to economics. 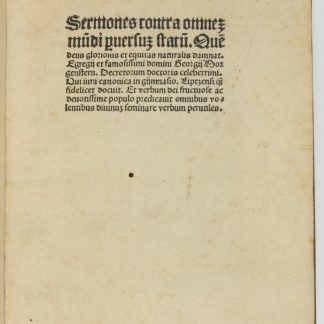