Pearl fishing in the Arabian Gulf

First editions of three separately issued parts of the very scarce "newly-opened amphitheatre", comprising the America, Asia, and Turkey volumes. The exceptional large woodcuts show the native inhabitants of the various parts of the world. Of special interest is the rare volume dedicated only to Ottoman society, as well as that on Asia: together, they cover the Islamic countries of the early modern period, including details on the Arabian Peninsula. Among the illustrations are various Muslim clerics, Northern Arabians and desert Arabians in Bedouin costume, coffee salesmen, sweetmeats salesmen, and a Turkish gentleman carrying the Qur'an on his head, as well as Persians, the Sultan, Janissaries, archers, dancers, etc. The Asia volume, produced later, repeats a single illustration but contains much new matter on Arabia, including a discussion of the Muslim religion, the Qur'an, ablutions performed with sand, and the trade in incense, coffee, and spices, as well as pearl fishing in Bahrain (p. 54). The America volume covers the discovery and exploration of America, with woodcut illustrations including portraits of Columbus, Vespucci, Magellan, and 30 depictions of Native Americans from throughout the New World, including Virginia, California, Pennsylvania, Maryland, etc.

This present set omits the parts on Europe and Africa, which were published first, and thus contains parts 3 (America) and 4 (Asia) of the four-part "Neu-eröffnetes Amphitheatrum" (the final part of which was produced only after a five-year hiatus), along with the "Neu-eröffnetes Amphitheatrum Turcicum", separately issued in 1723, from which the 1728 volume on Asia drew freely. Severely browned throughout due to paper. Title page of "America" vol. remargined; edge-wear to first and last few leaves only; wants quire G (pp. 25-28, including one illustration). Quire K in "Turkey" vol. (pp. 37-40) with expert paper repairs. In a highly appealing modern binding. 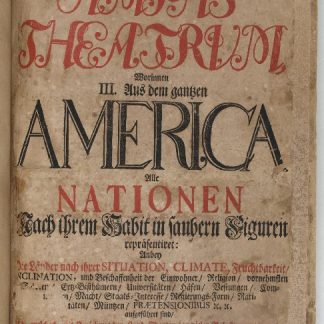